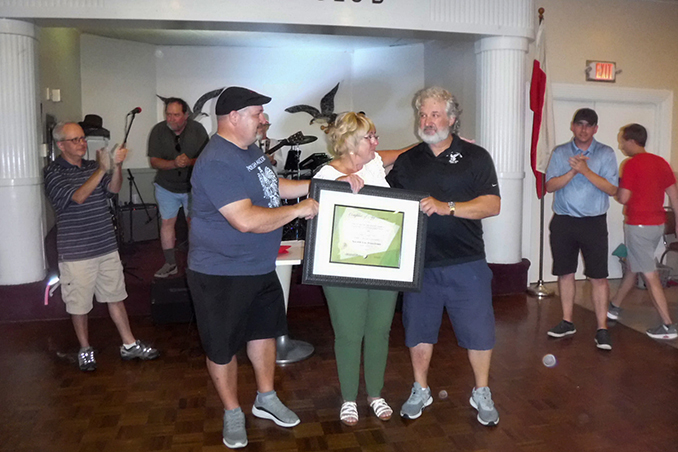 By September 8, 2021News, Uncategorized
No Comments

Congratulations to the Officers and Members of Nest 610 on a fabulous golf tournament! Members were so pleased to reconnect, but Nest 610 made the 52nd National Golf Tournament so much better! Those who worked (volunteered) were pleasant, energetic and helpful!

As I have mentioned, working with Bob Sulecki, Greg Wieser, Jim McCall and other Nest 610 Members was wonderful. Greg and I were working together to pave the way for future tournaments, as this was my first as the National Golf Commissioner. I have my opinion as to how this position should involve working with the Host Nest and handling some of the work (mainly the actual golf).

Tiarra McGinnis (Communications Assistant) and I worked together to create a Certificate of Appreciation for me to present to Greg and Bob. It was a simple piece of paper (although nicely framed!) that merely said thank you! We acknowledge and value all that you and Nest 610 did to orchestrate such a fabulous event! Thank you for Fun, Fraternalism and Camaraderie!

At the completion of the Awards Presentation on Friday evening, President Kuzma helped me present this award. He mentioned that collectively the Executive Committee, along with the Board of Directors has had some trepidation regarding the success and future of our Nests (especially those with buildings). Nest 610 has not only survived but thrived during the pandemic. They continued to operate (on a limited basis) but also made considerable improvements to their Nest building. Our President thanked and congratulated the Members but especially Nest President, Bob Sulecki, as he was the lead during this time. Hats off for a job well done!

The Nests and Members are the major component in the Polish Falcons! Without you, we would not exist.