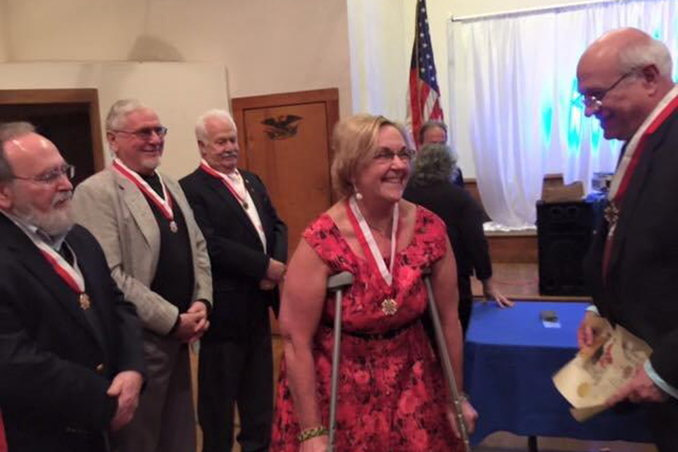 So while I am “stuck” at home and working remotely, I have been extremely busy. I do go into the office on occasion, but most of the time I have been in my office in Ginger Hill, Pa.

The project that has occupied the majority of my time is creating an Excel spreadsheet of the award recipients by Nest. Our new insurance program (which is 3 ½ years old) is not conducive to our awards program.

This is a lengthy project with having to input each name and each award date. It is so interesting and so much fun walking down memory lane. It is also fun to figure out names, sometimes at the beginning the name is Jozefa but by the end Josephine or Jan becomes John. Still fun! And then of course, women marry, divorce, remarry and so on.

I have done over 90 Nests. It is very interesting when Nests are merged or dissolved. There was one Nest that had a three Nest merger, but prior to that there were two Nests who had gone into one of the three.

Sadly though, so many Nests do not participate in this program. Now, there are quite a few who do and their pages were very time consuming (which is a good thing!). I am asking all of you to please acknowledge your workers. The thing of it is that the Stars of Merit are a pat on the back and acknowledgement that their dedication and work is recognized. By the time one reaches the Legion of Honor levels, the Member has shown extra effort needed for the Polish Falcons to survive for over 130 years! Legion Members are the most dedicated and supportive Falcon Members. They deserve recognition!

“The purpose of the Falcon Legion of Honor is the preservation and fostering of the noble ideals, principles, traditions, precepts and customs of the Falcon Order, as defined by its’ founders and originators. Those Members entitled/qualified for the honor are the deserving men and women who by their untiring sacrifice have worked within the Falcons and among Polonia gaining respect and esteem. They have also shown integrity and an unimpeachable character to obtain the finest reputation amongst the Falcon Members.”

Druh Walter Pawlak (Nests 8, 41 & 69) proposed the establishment of an order of merit for recognizing dedicated Falcons and their services. The Legion idea was strongly supported by Dr. T.A. Starzynski. The idea was presented at a Special Convention held in Detroit, Michigan in 1925.

There are two levels of our awards program – the Star of Merit and the Legion of Honor.

One must be a Member for at least three years (and be active) and at least 18 years old to receive their Bronze Star of Merit. Five years later, one may be elevated to Silver Star of Merit and five years later, Gold Star of Merit. The Member is nominated by their Nest; the application is sent into National Headquarters. If the National Executive Committee approves these applications, a pin and certificate is sent to the Nest for presentation to the Member.

This means, at a minimum, a Member qualifies for the Legion of Honor Cross after at least 18 years of uninterrupted Membership in the Polish Falcons of America. Work in other organizations, whether political or professional, cannot be the main consideration. Activities within the Nest are the main criteria for being considered for the awarding of the Legion of Honor or an elevation. Outside activities may be listed for informational purposes.

The Legion of Honor process requires more. Five years after the Gold Star of Merit, the Member may be nominated for their Bronze Legion of Honor. Not only is one nominated by their Nest (or in some instances, their District), the Executive Committee must approve before the Members of the Legion of Honor Commandery also review and approve the applications. The Nest/District will then receive a card, lapel pin, ribbon and certificate to present to the deserving Member.

The current Legion of Honor Commandery is:

Applications are available by contacting me or by clicking here. The website has fillable applications that you may fill, print out, and mail in.

Obviously, not all of the Commandery Members knows all the applicants. This makes it extremely important that the application is full of as much information regarding the applicants’ activity as is possible.

It is always nice to present the awards in a group setting but that isn’t always possible. Banquets, installation of Officers, picnics, parties, even living rooms!

If you have any questions at all, please contact me. I would be more than happy to help as would our Grand Master, Druh Ciesla (cieslaed@rcn.com).

John Nicpon receiving his Bronze Legion from Trish at home. John missed the Nest 8 presentation due to work.

Legion recipients at Nest 123’s awards presentation earlier this year (prior to the stay at home orders).