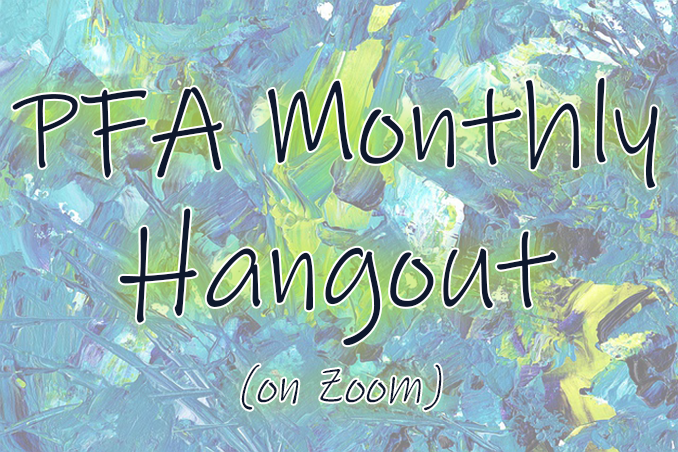 Missing your PFA pals? I know I am! So we thought, why not get together via Zoom and have some fun?!

We are planning a variety of activities – cultural, crafting, baking, gardening and more – for all to enjoy! The activities will be simple, easy things to make or do, and you can bring your snack/beverage of choice and say hello to your friends at the same time! We are calling it the “PFA Monthly Hangout!”

Please join Druhna Chris Puskar for our first session on Friday, Feb. 26, 2021 at 6:30 p.m. eastern. Be sure to invite your friends to join too!

For February’s activity, Druhna Chris will lead us in making our own clothespin wreath. A stress-free craft, all you need to do is bring your supplies and your favorite snack/beverage.

To receive the Zoom link, please send an email to Druhna Chris at cpuskar@polishfalcons.org.

Most of these items are available at the Dollar Store or Walmart.

Do you miss seeing your Falcon friends? Do you have some friends that you would like to get involved in the Polish Falcons? If you are between the ages of 12 and 20, here is your chance to get together and have some fun virtually with PFA! Join us for a Jeopardy-style Virtual Youth Game Night on Thursday, October 8th at 7 p.m. est. To participate, simply send your email address and age to cpuskar@polishfalcons.org prior to Game Night. You will receive an invitation to join the Zoom call. Once you click the invitation link, you’ll be entered into the game!

It’s time to tee it up! Polish Falcons of America is hosting its first-ever Virtual Golf Tournament: Falcons, Eagles & Birdies – Oh, My! The Tournament will take place August 22 through September 30 and is open to both Members and Non-Members. Learn more and sign up by clicking here.

By Courtney Caughey-Stambul | Uncategorized | No Comments

With the outbreak of COVID-19 and the cancellation of PFA events, and with history being an important part of the Falcons, I would like you to share your experiences as a Member with us. I am interested in how you became a Member; was it through your parents or grandparents? What activities have you been involved in, or are still involved in today? What is your favorite memory? How have your friendships in the PFA flourished? What are some of the things that you have learned as a Member? These are all things that interest me.

I know that I became involved in the PFA through my Ciocia, Betty Bubacz. She was the Instructress for Nest 118 in Pittsburgh. She always stopped at our house on the way to gym class with my cousins. One summer evening, she saw how bored I was and decided I should go with them to gym class. So, I went. That night Druhna Leona Kozloski was there to teach Polish dancing. I had so much fun that I continued to go to gym class and have been active pretty much since then. I did have a bit of a break during college. I got involved again when our National First Vice President Trish talked me into attending a Nest meeting. She has been one of those lifelong friends who helps me with everything. As soon as my children were able to attend events, they became actively involved. They both, too, have made many lifelong friends in the PFA. My husband took a little longer to get involved, but has been my back-up and behind the scenes helper with everything I do in my job as the National Physical Education Director. My cousin Barbara Chervenak was, for a while, my helper at all the Youth Events as Secretary, and a general helper with everything. Now, my cousin Patty Capozoli helps me with all those events. We always manage to have a great time with each other and the youth participants. After my pause for college, I have been active in my Nest and District and with the National Office. The Puskar’s are a Polish Falcons family. All of my closest friends are Polish Falcons people. I am very grateful to my Ciocia Betty for taking me with her to gym class that day. Polish Falcons is a huge part of my life, and I love every minute of it.

Now it’s your turn. I would love to hear the stories of how you became involved in the PFA. I know that there are many, many families that have similar stories to tell. Now that we are all mostly at home practicing our “social distancing,” you might have the time to write down your story and send it to me. Maybe we will get enough stories together to put them into a book. I love photos too. Maybe you can send one or two with your story?

There is no age limit to who can send their stories. All ages can tell us about their favorite parts of the PFA. I am looking forward to hearing from you! Email your story to cpuskar@polishfalcons.org.

#GivingTuesdayNow (May 5) is a global day of generosity and unity, a day to come together and give back in response to the unprecedented need caused by COVID-19, no matter who or where we are.

If able in this difficult time, PFA National Headquarters is asking Polish Falcons Members to make a contribution to support their Nests.

Our Nests have been closed for five weeks or longer. There is little or no income and bills still need to be paid. How much would you have spent at your Nest over the course of five weeks? Are you able to donate that amount or a portion of it?

Today through May 12, let us come together as Falcons for our Nests. This is your chance to show support for your Nest and make a donation to help the Nest get through these challenging times. No amount is too small. Thank you for giving. 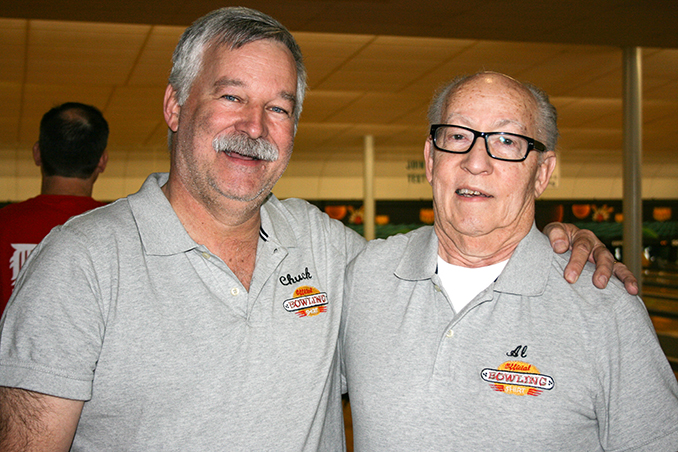 We are missing our bowlers this year! As we await the time we can gather together once again, check out this list of past PFA National Bowling Tournaments compiled by Janet Knauber and Trish Del Busse. 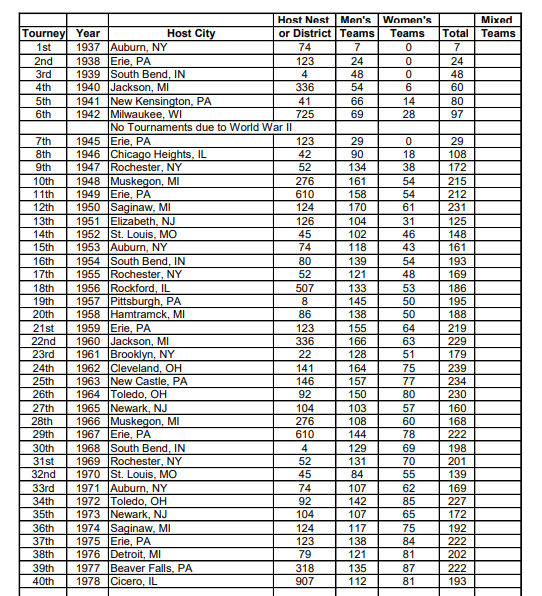 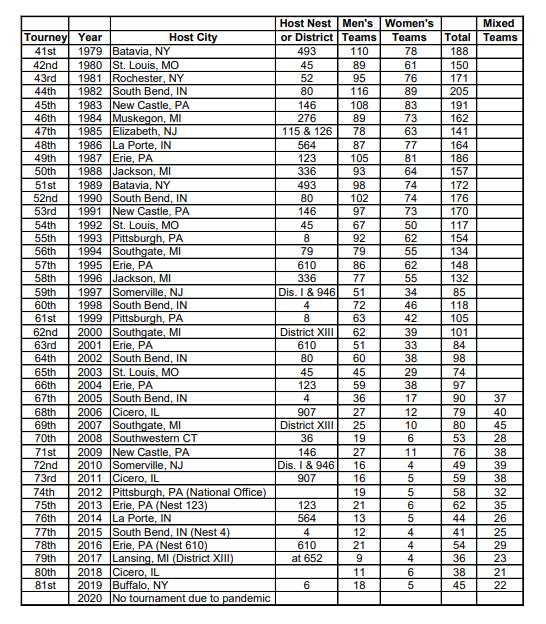 My first National Bowling Tournament was in 1981 hosted by Nest 52, Rochester, N.Y. At the time, Nest 52 still had their Club, which included a small bowling alley next to their bar. I had just moved and was not in a good frame of mind (I get very emotional!), and I simply did not know what to expect. I was quite surprised and not in a pleasant way. I went home and told my Mother that I thought the event was awful! Her response – “Well, there is something wrong with you!”

That fall, we attended the District IV Bowling Tournament and had a blast. A few folks asked us if we were going to South Bend (Nest 80) in the spring. At that time, there were two weekends and most of the Pittsburgh Membership went the second weekend. Well, my Mom went the second weekend; so we decided to go on the first weekend (There were other factors within our team that made the decision.). In a better frame of mind and expectations slightly different, off to South Bend we went! Five of us jammed into one car and all of us slept in one room! Obviously, I understood my Mother’s comment!

But, the common denominator at the tournament all those years ago was the camaraderie. And that remains the same! Bowling is simply an excuse to get together with life-long friends! The Camaraderie!

And, I met my John at a National Bowling Tournament all those years ago!

See all of you next year in St. Louis! 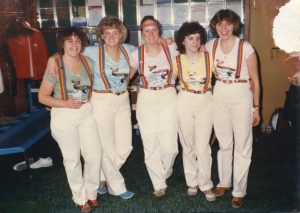 Come Together: Make a Difference

By Courtney Caughey-Stambul | News | No Comments

It’s the season of giving, and we are excited to introduce you to a new and improved “Come Together: Make a Difference” program! Click here to learn more.