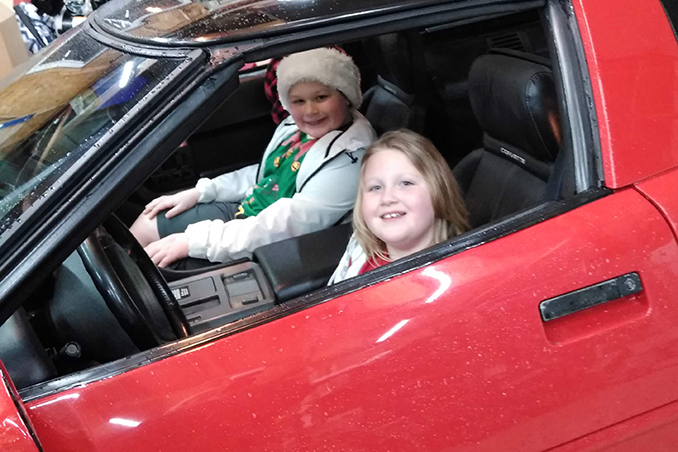 By Courtney Caughey-Stambul | Uncategorized | No Comments

Obviously, our ways of celebrating and enjoying have been drastically modified this year. Our ride on the Polar Express was no exception. I remember when I had mentioned to Ryanna that we wouldn’t be able to ride the Polar Express this year (Two years ago, we rode one in Ohio and last year, one in New York.), she asked if we could do this at home. This got my wheels spinning, and the only thing I think that could have made this better would have been if I had played the audio version of the Polar Express Story in the car (which we have and have listened to previously), but I hadn’t thought to do that!

Last Friday, Conductor Nonni put on her conductor hat and climbed aboard her beautifully decorated train (Gaga wrapped battery-operated Christmas lights around the luggage racks, the hood and the wreath that he had secured to the grill along with a Rudolph nose. He also affixed reindeer antlers and Polar Express flags to the racks, placed a Polar Express sticker on the front window and attached a Polar Express license plate to the front of the car). The first stop was to pick up Ryan, Ryanna and Mama. The kids donned the hats that elf, Sparkle (another story) brought, then came out of their house to the sound of a locomotive (YouTube!). Once they showed their tickets, they jumped in. While riding around the neighborhood enjoying the decorations provided by the community, they sipped hot chocolate and ate cookies. When we chugged through Mon City, Santa was in his little house so we stopped to visit with him. Of course, we had to social distance.

Once aboard again, we continued on our journey. When we arrived back at the station, (the outside of the station was decorated with lots of lights including their climbing dome) there was a visitor with Gaga. It seemed that Santa made an early stop to Ginger Hill! The family room had been decorated including a tree and lots of other decorations.

Santa gave each of the kids a bell ornament (if you know the story, this is very important!). Probably the best surprise for the kids was the “sleigh” that Santa used that night. We took a walk to my garage and were surprised to find that Santa had driven to our house in a red corvette! Santa allowed the kids to sit in the car, start it, and bring up the headlights!

Ryan & Ryanna understand that the real Santa never leaves the North Pole as he is too busy. His helper, Bernie (a friend of John’s), was able to get out of his extremely warm suit and spend some time with us. Each of the kids gave Santa some candy as a thank you! Santa will receive cookies in a couple weeks!

The amusement, the joy and the fun made this night another wonderful experience that I am blessed to share with my grandchildren. I would love to hear how you are celebrating all the while keeping you and yours safe.

Each Nest Financial Secretary received their end-of-year packet of paperwork around Halloween. Most of the forms are not due until February 28. BUT, if your Nest has the National Office collect your Nest dues, we need the roster and forms returned to us (deadline was last week). Please submit this or there will be no changes made to your Nest dues bills.

Each Nest President received a letter via email regarding the election of Nest Officers. The point of the letter is about the Nest elections. “Since these are unusual circumstances, especially concerning gatherings, the Board of Directors approved the recommendation of the Legal Committee that a Nest can extend the term of its current Officers for an additional year. This would eliminate the need to hold a meeting to conduct an election this year. Please note that a Nest can still conduct a meeting, virtually or in-person, if it chooses to do so.”

Keep safe! Enjoy the preparations for Christmas, try not to get bogged down by the work and simply enjoy the season.