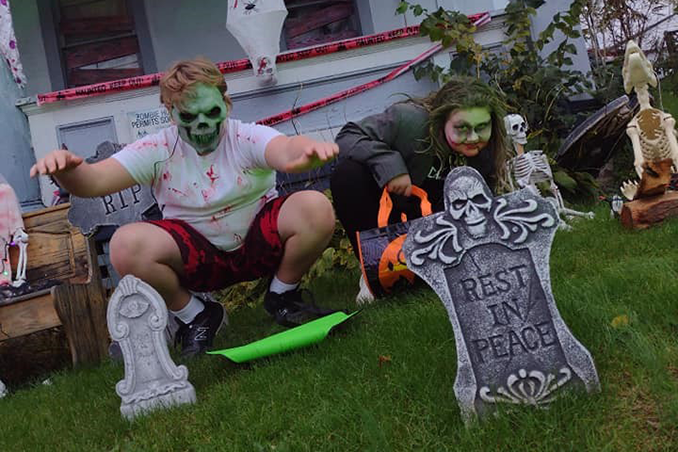 Erie seems to be the place for us these days as I have been back up there twice in the last week!

Nest 610 once again sponsored a bus trip to Buffalo for the Bills game. Greg Wieser was the lead on this trip with help from Dan Wisinski.

The morning of October 31, I dressed in my Halloween costume (as a Bills fan) and climbed aboard with the others and made the trek to Buffalo. It was a good game, although a bit boring and scary the first half! We arrived early enough to tailgate, socialize and roam around the area enjoying the festivities as so many felt the need to celebrate hours before the game. There was a bit of rain so John bought me an old lady hat to keep my head dry. Our seats were at the top of the stadium. Once I made it up there (an usher had offered the use of an elevator and for some silly reason, I said, “no thank-you!”), we had a good view. It would have been a bit better if the guys in front of us would have been seated during the first three quarters, but it was still fun to be there and the Bills won! That day, while I watched the Bills game, the Steelers beat the Browns!!! A fantastic football day! Another terrific job done by Greg and crew!

Prior to my Erie trip, the kids and I had some Halloween fun! Ryanna and I went to the mall to trick or treat. The mall does a great job, but the crowd was probably 50% smaller than the last time. Lots of fabulous costumes on both adults and kids!

Friday night, Ryanna thought she wanted to visit the Demon House with her Gaga but changed her mind once she became aware that there are people inside not just decorations! There is no way one could get me there! Maybe next year, Courtney and Dave will go with John!

Ryan and Ryanna were able to trick or treat both Saturday and Sunday nights. Of course, it rained on Saturday but Sunday was a bit dryer. Fun, none the less! It is nice that we are able to get back to some somewhat normal activities!

So, the slide has begun! Halloween is over and before you know it, we will be wishing all a Happy New Year! Enjoy!